Please note this post was written in 2016 and is being reposted. Enjoy, but keep in mind the date of writing.

Well, there is no way other way to start this week than with a picture of the late, great Ronnie Corbett. A huge loss to the world on Thursday. Now it has been disclosed that dear Ronnie died of MND! Ronnie, like several famous people who have had MND, did not make his illness known, but it is important that it has now been made public. Affecting about 1 in every 300 of us in our lifetimes, MND needs as much press as possible to help crack a disease that currently has zero effective treatment.

Ronnie was a very funny guy. So many famous sketches. It was great to search YouTube and watch them. Laughing and laughing, they must have had such a great time making the shows. It was true family viewing, with children and parents being able to laugh out loud for their own appropriate or inappropriate reasons!

So in tribute to Ronnie, I have a packed post this week.

The big highlight for me this week was being invited to the recording studios of my favourite Rock Band, Genesis, after I mentioned them in my last post. What a surprise, and I was so excited.

We had an interesting drive to the studio. Jean and I picked up the one and only Nick Davis (record producer and sound engineer) from his house, and then proceeded to drive cross-country to the studios. This had been Nick’s regular drive for many years, but boy did it consist of dangerous junctions and traffic crossings. Nick recalled a few close scrapes. It’s a wonder any albums got completed without injury, Nick?!

Storm Katie had taken a few trees down along the route, but after a beautiful sunny drive we arrived at, for me, a mythical place. The band had built the studio back in the 1980’s to save money! Studio time was so expensive then, so a few big artists built their own facilities. Although this looks like, from the outside, a toilet block!

First challenge,  a slope to the entrance. This is like a ski black run to me! 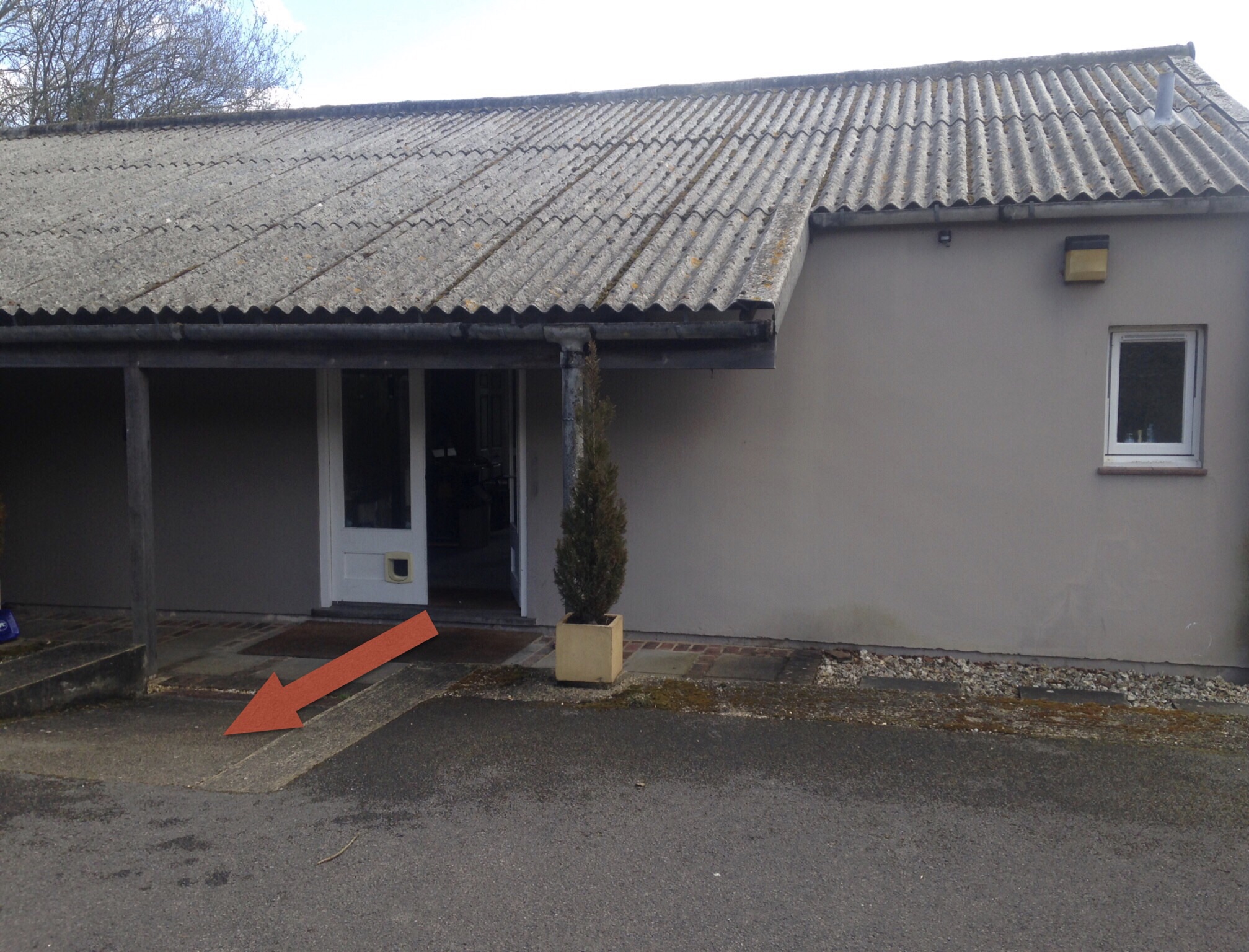 It was like going back in time, you could feel the atmosphere and energy. This was where the masters had worked and produced such great music.

We took our dogs, Poppy and Dora. I set them the task of acquiring as much memorabilia as possible, old master tapes, guitars etc! Report back later girls, what did you get?

I am fully aware that me going on and on about such a visit might appear boring to non Genesis and Phil Collins fans, so I will keep it brief, and try make it relevant to the wider world. However, I might fail, and in the words of Genesis “I know what I like!”

Here is one of Tony Banks’ Mellotrons.

For those who don’t know what a Mellotron is, it was a wonderful early “synthetic” instrument. It is an incredible electromechanical machine which consists of individually recorded 8 second tape loops for each and every key! When you press a key, the selected tape plays.

It kind of reminds me of my own early toying around with electricity and making disco lights that reacted to music. When I was about 14, as Mad Professor Millard, I won’t go into any detail, but let’s just say it wouldn’t pass today’s Health and Safety standards, and if my parents had known what I was doing in my bedroom they would have been livid. Kids today, you don’t know you are alive!

On the subject of a Mad Professor, it also reminds me of when I attended Sales School many years ago. For one task, my team, rather like an Alan Sugar Apprentice team, had to give a presentation to a senior visiting director. Our team leader was an idiot. We split the task up into 4 presentations on the components of our proposal to the client. I took charge of the final section on the technical detail. Watching the other 3 teammates completely and utterly bollocks it up, I was on last realising that I would have to make drastic changes on the fly to have any chance of convincing our potential (although role played) client. For those of you who know me, you will understand I can get quite detailed, precise and very passionate about things. I realised I had to do this to have any chance of saving the task. Afterwards, the Director let rip into the first 3 presentations with a venom that made Alan Sugar sound like a pussy cat. He basically said that if this had been real world he would have walked out within the first 2 minutes. He then came to my presentation review. His very words were. “Lee you nearly managed to retrieve the dire situation with your Mad Professor approach”. Feeling smug, but annoyed, as that team had cost me points in the overall course leadership, I proceeded to take charge of the next task!

Anyway, back to the Mellotron. Not only did it require great musical skills to play, it also needed a mathematical ability next to that of Einstein! To play chord sequences, because of the 8 second maximum sound duration, before rewind, the player had to release and time notes shared between chord changes to accommodate this! Genius. The result is what they call history, a major characteristic of the early Genesis sound. For those of you new to my blog, take a read of Saturn’s Rings and MND to really understand the value of mathematics. Get your kids interested in algebra!

Nick, many thanks for the amazing tour and the memories it evoked. I felt very privileged.

Now a scene from a play, where Lee Millard attempts to be a sound engineer by twiddling his knob. “Nick, I think this track needs a bit more bass! You have saved the work haven’t you Nick?”

Poppy, now where did you put that missing guitar? For those aficionados of guitars, Mike Rutherford was one of a few famous guitarists to use double neck instruments on stage. Several are shown here, but his most famous one is actually in two pieces near the far end of this photo. He had the ability to bolt two pieces together to produce different 4, 6 and 12 string formulations.

Also in the news this week….

I have been out on my trike a few times, with varying results. As I don’t want to get out of the trike until a major stop or my return home, I now realise that panniers behind my seat are not an easy place to store and retrieve things! So this week, I had to stop and ask a nice lady if she wouldn’t mind putting my bright yellow hat in the bag as I was getting too hot. Police are now looking for a nutter chasing women on a trike. After a quick escape, I managed to duck down an alley to prevent arrest.

I promised you a weekly moan in my blogs. This week it is this monstrosity!

This is one of the most useless, and actually highly dangerous road alterations that can be made to aid so called road safety. Any cyclist will know that being in this area whilst crossing such a junction is absolutely the worst place to be. What sort of ***** idiot designs and then endorses such a system? What a Twonk. The only cycleways that work, are dedicated carriageways. Ooh political, Lee!

I am thinking of starting a spray painting gang that goes out after dark to cover up these things. Anyone interested, please meet behind the chip shop on Wednesday night. Please bring warm clothes, as it can be quite chilly, and 2 cans of black paint each. Don’t forget receipts as I can only provide reimbursement for campaign materials with these. For those wanting to make a night of it, I will be having a drinks get together at the village pub afterwards. Paint remover and nuts will be available for those wishing to revel in our rebellion. “Your Nuts M’Lord”, another great two Ronnies sketch. Power to the people!

I had a small incident on Wednesday afternoon whilst at my Physio. After my treatment I was feeling in top form and decided to demonstrate my morning stretching routine, whilst still only in my pants, to my Physio. I sat on the floor, and changing positions, lost balance and started to wobble whilst in cross-legged pose. I suddenly toppled and started a small fall towards to the radiator. Fortunately damage to the radiator was prevented by my head cushioning the motion, bouncing off and swaying then into the wall. A small bump to my head was the result. Sorry Liney, for making you witness that. I must keep focused. The thought of being stretchered out in my underwear was enough to guarantee the answer “I am fine” to your question, “My God Lee, are you ok?!”

“West Mercia police announced tonight that they wish to interview a man wearing high heels and frilly knickers, but the chief constable said they must wear their normal uniforms”