Well, Celine Dion did make me cry when I saw her at Caesar’s Palace a few years ago (powerful song and, whatever people say, she has the voice of an angel).

I just couldn’t stop myself from choking and being tearful. I thought at first it was the price of the tickets that did it, but no!

Today, I sort of half wonder if this was a mild example of one of the lesser known symptoms of MND/ALS, known as Emotional lability. MND sufferers can sometimes cry or laugh at situations which are neither sad or funny. We don’t understand exactly why this happens, but it appears to be a heightened reflex and is very common. I have seen a couple of sufferers on TV in tears, and you would probably assume this is from the pure emotion of living with the disease. However, bear in mind that it could actually be this reflex. It’s very real.

Quite by coincidence, yesterday, at an MND conference in Oxford, one of the presenters discussed a rather sensitive subject and the presentation slide displayed a fascinating image depicting the human brain. The picture was a bit titilating, and caused some laughter which escalated and rumbled on for a fair while. It was all received well, but it was definitely an example of the symptom.

Fortunately such potentially distressing times can be somewhat alleviated with drugs.

Although I don’t cry or laugh randomly, I do wonder if my complete inability to hold my emotion listening to certain songs is related.

In fact, I believe I could create a good public service, providing people with lists of songs NOT to listen to in certain situations.

For example, Karen Carpenter and “I know I need to be in Love”, will, as you digest every line, turn you into a mess, and unable to prevent a monsoon of tears. Definitely not a good one to listen to in the outside lane of the motorway (highway) at xx mph!!!

Talking of driving, the recent VW scandal of cars cheating emissions tests to gain false fuel efficiency and pollutant measurements is, of course, a serious breach of ethics. However, when it comes to car efficiency, I believe that there are untold factors which affect miles per gallon. One of these is the music being listened to.

I have found that a nice Frank Sinatra tune can get you good mpg, whilst listening to a rip-roaring Freddie Mercury and Queen track can really burn the tank away!

What an interesting phrase that is, and I will definitely be coming back to it in a planned post on research.

“What about this gong?”

Early on in my symptoms, I noticed that with my hyper-reflexes, there appeared to be an accompanying oddity. I was being startled very easily. The first I really noticed it was when I was sitting in a coffee bar working on my laptop. A lady tapped me on the shoulder to ask me if she could share the table. I nearly took her head off with my reaction! Thank goodness I didn’t have my triple choc, mocha, raspberry thingie in my hand! It was like a lightening bolt.

I mentioned my reactions to my Neurologist, and he wasn’t at all forthcoming. In fact he dismissed it as a different neural pathway.

“My dear Lee, that cannot possibly be the case!”

But Dr Google soon found out that this was a common symptom in MND/ALS and when I met a leading MND Research Professor he confirmed my suspicions.

Although distressing, the startle reflex is not a disaster for me currently, but can be quite amusing, or messy, if I am cooking. My stir fry hand can flick briefly if someone drops something, or hits a gong, for example!

Actually, living with my lovely wife, Jean, who just happens to be a bit clumsy, makes daily life a bit jumpy. It’s strange how she appears to deliberately drop items more these days when I am around!

There are times, however, which are a bit more tricky and can cause me real issues. For example, if I am out walking and someone shouts,

The best I can hope for then, is a rapid re-adjustment of my walking direction into a suitably placed piece of dog’s mess and then a regaining of my composure. Rather like a gymnast finishing a great vault (10 points!)

Walking into a black widow laced cobweb can have the same effect! Witness my recent encounter with giant spider in the garden… 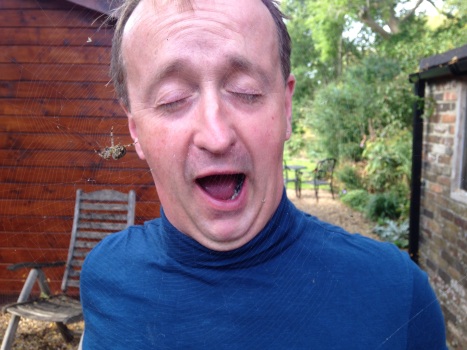 Until next time readers. I am going on a couple of trips, but worry not, a post will written.

Arhhh Dire Straits, perfect. Might need to get some fuel….