My wife and I have become addicted to Scandinavian dramas/films. The most recent of which, The Bridge Series 3, has just finished. For those of you who haven’t seen this amazing trilogy, it is set in Sweden and Denmark, the spooky bridge being the link between the two countries.

It has really affected me, and along with the wet and gloomy weather here, my writing has suddenly turned all dark…………

So let’s dig into the deep and murky world of onein400Danish for just this one week…..

I was thinking about our Village, and what ghastly goings on occur behind closed doors or perhaps cellar doors!

Does the lovely old lady who lives alone five doors up from us have a sinister secret? Certainly, when I spoke to her on one of my recent staggers (walks) she seemed bent on revenge on her neighbour who had installed solar panels recently. We live in a conservation area and people get a bit sensitive. Anyway, if he is found nailed to a boat in the river, with a message burned onto his body with a magnifying glass, I know who I would question! But I didn’t tell you, ok?

Then there’s the new couple who keep to themselves. Besides the odd sighting and huge Internet food shopping every week, they seem quiet. But isn’t that too much food for a couple!?

We have our share of angry single mothers shouting at their children in the street. I dare not say too much in case they attach themselves to me.

I had a bit of an episode this week!

One of our dogs, Poppy, escaped from the garden! “Sh**”, I thought, “my days of leaping fences have long gone.” I could see Poppy in my neighbour’s garden, so I started my hobble to her house. Our neighbour is about 80 years old but walks significantly faster than me and has a garden the size of Denmark! We went out the back and she marched me off down the garden. It was getting dark and cold. Half way down the garden there were three steps to a lower level, with no hand rail! My neighbour sped off, and I could not get down the slope. Going downhill is terrifying.  Without my stick, the only way for me to have descended, would have been to lay down, scramble across the steps and then get up!

My neighbour disappeared deep into the garden, and I started to get very worried. I was getting really cold, and I had just sent a frail elderly lady out in her garden in the dark! Where was she? Poppy had vanished too! Then out of fricking nowhere my neighbour re-appeared and offered her arm for me to hold. I declined, as although my walk is terrible, I could see the horrendous potential of me dragging an octogenarian to the ground in a heap of blood, broken bones, and the subsequent slurred police interview along with the Parish magazine headlines!

So I made my way back home, only to see a suspicious car parked outside our house and Poppy looking at me, laughing, from the passenger seat! She had been found in the Village Square by a tall blonde lady and her son. Fearing a kidnap scenario, I thanked the lady kindly and asked her to throw Poppy through our front door! Safely inside I explained to Poppy the dangers of running off and the potential weeks of confinement for her and her master if we were to be taken off in the tinted glass car by the perfect skinned blonde abductoress.

Poppy just shrugged, and ran off into the kitchen.

How did she escape in the first place? We have good border control in our garden. I am now beginning to think there is a whole group of Danes camping outside the village sneaking in and releasing loved pets.

Having survived Monday, I didn’t sleep at all well. On Tuesday I was asked to meet here at 12 noon… the Itchen bridge! Well, to be precise a disability services building near to it. 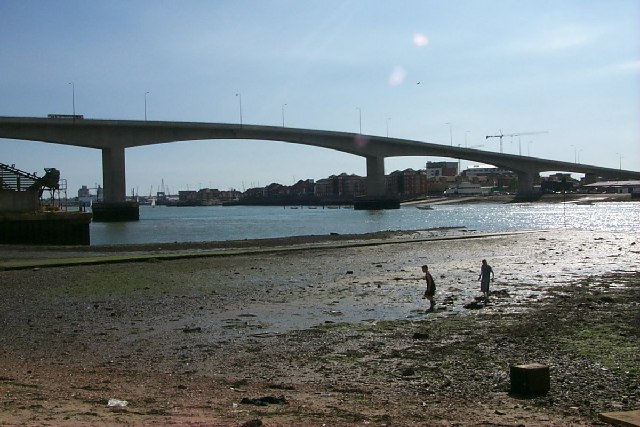 Having watched many nasty violent box sets, I made the wise decision to travel alone and told no one where I was going! I took warm clothes, hat and gloves. I had been asked to attend a short wheelchair driving assessment before my order for a powered wheelchair could be finalised.

I entered the building on a deserted trading estate and was told to sit in the wheelchair. I was then strapped in and accompanied on drives around the empty building and out onto streets! I was followed by three mobility specialists in sharp clean overalls and told to drive towards the bridge!

“When you get to the bridge change the speed to 5!” I heard my main tormentor whisper.

My gloves fumbled with the controls as I accelerated towards the lonely bridge. It was getting colder, and they wanted me to cross the four lanes of the highway! Is that light really green? Did one of them have a remote control for the wheelchair? I gave the cars waiting at the lights my best psychotic evil stare. I am sure I spotted a Danish film crew and a midget playing a synthesisor. After 10 minutes of looking like an accompanied nutter out on a Freedom Pass, I was allowed to steer back to the apparent safe haven of the building. What fate would await me as I rumbled through the electric door? Were they going to dissolve me in acid and pour my remains into the river? Or was I to be the subject of a gruesome interrogation by psychologists angered by my scathing research review last week. Would I be forced to listen to Cliff Richard for hours on end whilst driving a wheelchair around a raised track above alligators testing my reactions?

Once inside I was released and offered a biscuit. The wheelchair order was approved and I was allowed to leave.

My fears were unjustified, and the excellent assistance of Nikki and her team really helped me through what could have been a nightmare!

I got back in my car, relaxed and started the short journey home.

The weather was still a bit dull, but suddenly, out of the dark haze appeared a KFC drive-through.

To get myself back to normal, I thought I’d get a small lunch.

“A zinngwer barwitow, puwse” (A Zinger Burrito, please) I muttered to the ordering machine. Delicious and nutritional.

As I drove through Emsworth, the nearest town to our village, I was reminded of a local scandal brewing. There is the threat of a Costa Coffee coming to ruin the small town atmosphere. Well, if I can get an easy take away I’m up for it! I am not one for halting the march of progress and would welcome the new business. Mind you, if that boat with the body in the river has a Costa napkin and cup discarded in it, I might not express my views anymore.

It is now Thursday, the sun has appeared, all is good, and the serial killers appear to have a day off.

Next week I might do a VLOG! Yes viewers, a video blog!

Ok, signing off for the week.