Well, this week has been busy.

Firstly, Jean and I spent the weekend on the London to Brighton Mini run. Such fun. This year we didn’t camp, as the very thought of dragging my body across the field, through whatever was mixed with the mud, to the rather unsavory portaloos, was not that attractive. So this year, we stayed at a Travel lodge. It was perfect. I do find the dark blue carpet interesting, as it obviously hides a lot of sins! With the Mini safely parked in the disabled parking area, we settled down for a short sleep, arising at 5am to go to Crystal Palace park to add our mini to other 1999 cars.

The drive to Brighton was beautiful, and when we got to Madeira drive, we parked in a disabled area. I must admit I was concerned about how far I could walk, but in the end we did all the usual things we do in Brighton! Shopping and eating. And I must say it raised my spirits back up. So much so that we are going back to stay very shortly.

A lot of this week has been taken up with the organisation, and the accepting of generous donations, for my June 4th MNDA event. I have some great donations, which will now be auctioned on the night in both a silent and a live auction (no raffle, folks). Click on my wonderful poster for the very latest details! We are now also taking pre-event bids by email! Have a good read of the instructions and how we are going to play the night out. Bring it on, it’s only money! 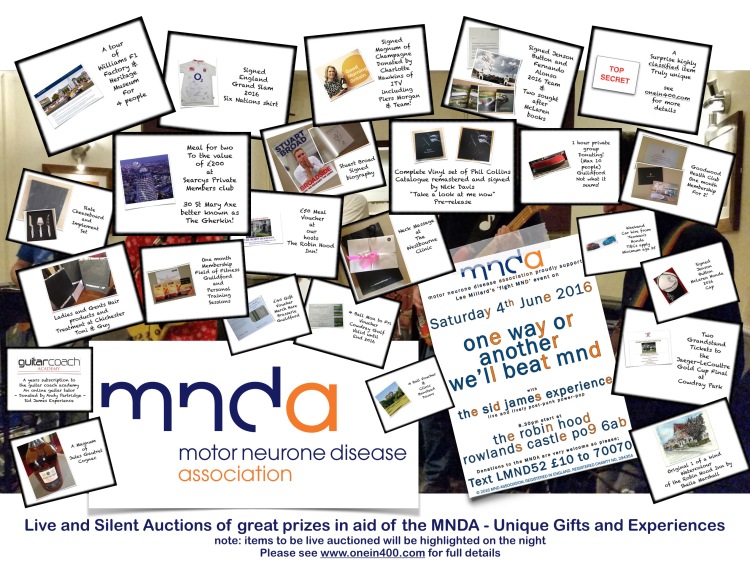 My event is in June, which is the National MND/ALS awareness month. This year, the MNDA is running a campaign called “shortened stories”. It promises to be very powerful. Every year, the MNDA create a campaign, and there is always a bit of controversy about it. “It’s too hard-hitting” for example.

For me, no campaign can be hard-hitting enough. We have to show the reality of this disease, how common it really is and raise awareness so that more funds can be directed at a therapy.

I met a good old friend the other day for the first time in a few years, and she noted my walk and said “What have you done to your back?”. It was the first time for a good while that I have had to explain my situation. When I Said MND, she said “What’s that?”. Sadly this is still too often the response, and this is why I want controversy. All advertising is good as we know. If we upset 5 people, and that gets us a story, great! Today everyone knows what cancer is, we need the same awareness for MND.

So despite my focus on my June 4th event being fund-raising, the real aim is awareness.

Bugger! As I write this I have just done the most stupid thing. I have prepared a meal using chillies, and I just rubbed my left eye! My eye felt like fire, and started to stream like crazy. I closed it to remove the pain, opened it again, and a child-birth like pain returned with even more streaming. I decided I had to get to the kitchen. So getting to my feet, I started my stagger. I could just see collapsing with a bright red-eye. It was quite simply the worst chilli accident I have ever had. I write this now after 10 minutes of immersing my head in the sink. Jeesh, what’s worse than MND? MND when you shove a firey chilli in your eye! All is good now, with just that faint warm hum. But it felt like I was going to lose an eye, readers!

Had my weekly physio on Thursday. This week I was treated by a different lady as my usual physio was unable to make it.

Anyway, after explaining my history (she knew anyway, thanks Liney for briefing), she then said

“Right clothes off to your underwear. You never know what to expect in a man’s trousers!”

She suddenly realised what she had said, but explained.

She was commenting on my rather nice Paisley pants! 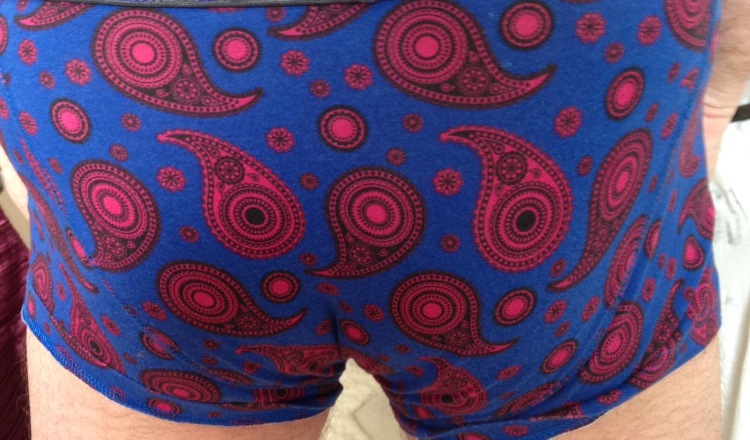 Anyway, the treatment was good and I walked out safely at the end.

On Thursday night, Jean and I met up with the Sid James Experience, and they get the real thumbs up for performance! They are going to be great on June 4th. Jon, the drummer, has encouraged me to attempt to play guitar on one song. As I say guys, I need distortion! The clear sound showed all the faults! MND has played havoc with my former Jimi Hendrix speed fingers! So I might be doing a Val Doonican type performance (ie seated). Anyway, I have also found the most dangerous place for an MND sufferer to visit. A rehearsal room! Cables, pointy things all over the place. Survived though. Remember guys distortion needed! Or else it’s the Pete Townsend treatment for the gear! Mind you, I might need help sticking my axe in the drum kit!

Same time next week readers, which will be the day before my MNDA event. Woo hoo!

Oh I forgot to mention. As Lord Bragg has the rights to the Sid James Experience now, he has made a video to promote the event. I am so sorry, it will be released this weekend.