Last weekend we had an unexpected last-minute travel expedition to North Wales! Sadly Jean’s Auntie, who we stay with on our trips to the coast, died and we were invited to her funeral.

It was a lovely weekend. Somehow funerals, although distressing, can be a source of great calmness.  It was our second funeral this summer. More about Jean’s Auntie later.

People who know me, understand that I am a very precise and focused dude! For example, if we ever drive anywhere a long way from home, I prepare the car and make sure we have the spare car keys! Also the spare keys always have to be outside the car and on a different person. Jeesh, I hear you say, how anal? Well I guess it comes from working with computers from the early days, ie when they didn’t work so reliably. I always backup data etc. You young ones wouldn’t appreciate how unreliable computers used to be. I suppose the car stuff comes from when cars were as about as reliable as the England football team are now!

Well this weekend, Mr Backup’s planning came to fruition but in addition my incredible eyesight! Yes readers that’s one part of me that is still laser like.

On our return from Wales, Jean and I stopped for a Coffee and a wee break for the doggies. I went into the coffee bar and Jean, who had been driving, took the dogs over the road to a grass area.

After the coffee and our wees, we put the dogs back in the car, and Jean suddenly couldn’t find the car keys she had! I gave her the “You have lost them look” and I thought immediately that she had dropped them whilst walking the dogs. I looked over to the grass patch, about 80 yards away, and I saw a slight dark patch, but of course couldn’t be sure it was the keys. Anyway, I was totally calm as I had a spare key in my pocket! “Back of the net”, as Alan Partridge would say, my 35 years of intense planning had been proved worthwhile. So we were OK, but I then sent Jean over to the grass area, and bingo, that little dark area was our keys! Victory is mine! So readers, pack those spare keys etc.

Unlike our travel to Norfolk last weekend, this was a truly traffic free journey. However, other perils await the confined car traveller. A fart in a space suit, is they say not welcome, well a hot car is the same.

Just as we were pulling up to the toll booth on the M6, someone or something in our car let rip!

At least the road after the toll booth was clear. I think they were holding back to give us space! 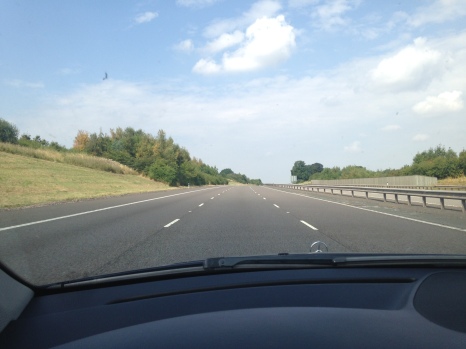 This is my sort of road!

We were listening to Jeremy Vine the other day whilst tucking into a lovely KFC lunch. It was really tasty. His subjects of the day were anorexia and hoarding for disasters! Why do I always seem to be stuffing myself when I hear about eating disorders on the radio or TV?! Anyway, no problems with my eating currently!

More ahead planning this week. We ordered some Xmas cards! Along with the cards, I ordered a new water bottle for my trike. A really bright MNDA one.

At least if I get crushed on my trike, they should find this bad boy!

On Wednesday I needed to pick up some foreign currency for an upcoming adventure. We went to our local town, Chichester, and whilst Jean was having her hair cut I was to get the cash.

Incidentally, they have thoughtfully placed a walking stick holder by the seats at the hairdressers! 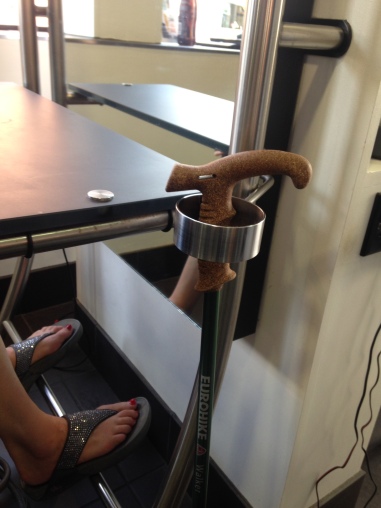 I was then trusted with the 50 yard walk to and from Marks and Spencer to get the loot. Walking stick in hand, I traversed the precinct, and entered the store. The foreign currency till is on the first floor, so I made my way carefully past the rather unfashionable clothes (sorry M&S), and arrived at the back of the shop to get the lift. Oh no, I was not the only person waiting for the elevator! A mother and a child, (out of pushchair) leaping around pushing buttons, were there to set me a challenge. Once in the lift I was safe. I let them out first!

And now, the only thing between me and the currency till was the biggest Lingerie area in the world! Off I started with my hobble. The bra and underwear shelves were bursting and I could just see myself stumbling, catching a bra, and ending up in a heap.

After a gusset free traverse I finally arrived at the till! Cash obtained, I retraced my path. Anyway, they have a nice selection, Ladies! We all know M&S is good for Lingerie and Food, but not much else in the 21st century!

Finally, a story about Jean’s Auntie. She lived a great life. She was energetic and lived to a ripe old age. In later life, she, like many, was cared for by family and carers. In fact two of her favourite carers came to the funeral, which was really nice. Of course, caring is one hell of a job, and there were trying times. However, they could always see the funny side despite. One of them recounted a story that Jean’s Auntie had said the following recently whilst helping during her daily routine..

“You have such a pretty face for one so cruel!”

We were there when she said it, so don’t worry readers there was no nasty wrong doing. But it all had us in stitches! She was a feisty woman.

Same time next week guys. Who knows what the week will bring!?

Oh, and this week I have started to use my rollator, complete with Walking stick holder.

I am writing this in our garden, and a bird has just **** on my shorts!