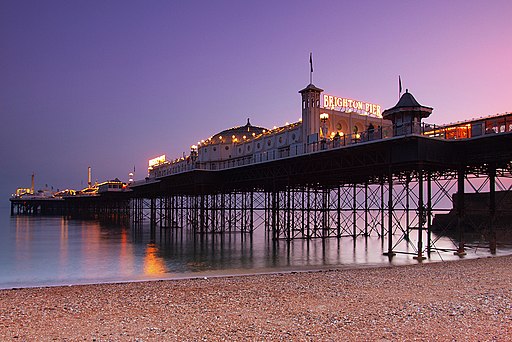 Great week last week, Jean finished teaching for this year, and so we will be spending a lot of time together. It won’t be that bad, baby!

Our daughter-in-law’s mum, Avril, popped over from South Africa and she had a great time despite this thing called the British Weather!

After spending some time with her daughter and our son, I picked Avril up from their flat and drove her back to where we live. I thought, “Why not make the trip from Walton on Thames back to Hampshire as interesting as possible with some commentary and scenic tour?” Well as interesting as the A3 (highway) can be!

As we passed Guildford, I started talking about the classic film, the Omen.

Why? Well the Cathedral was the scene of the devil’s character, Damien, going mad when his family took him to church. Also it reminds me of the time that I was driving past the Cathedral at exactly the same time as the car I was travelling in changed its mileage to 666! The number of the devil! I am not shitting you! Avril, you can now watch the movie, and recall your visit.

It was sunny on Friday night, so that can only mean one thing in Britain, BBQ! Avril, you can tell all back at home we can eat outside! Fleeces and a fire helped!

On the Saturday we took Avril to Brighton, and what a great day. Food, walking (well me trying not to fall into various stalls, cakes, vegetarian shoes, tourists, etc) and watching a play “After Miss Julie”, which was fantastic. Definitely worth seeing as it tours the UK and I believe it is going to the West End in London. The only let down was the lack of Maltesers in the theatre bar! Really quite disturbing and in post referendum UK a worrying indicator.

Brighton is so crazy, and although the whole economy would fall apart if everyone lived their lives like Brighton people, it is one of the greatest places on this planet, when sunny.

It was Avocado week, and we each got a free one from modern-day hippies in a Brighton Park!

I feel very at home there, with my poor walking and stick. There is an awful lot of walking stick people in Brighton. Why is that? Continuing on the movie theme, I even showed Avril the alleyway in which the actress, Lesley Ash, ran down with her boyfriend in the film Quadrophenia. Those of you who have seen the movie know what happens in the alley, which I explained politely and quietly to Margot’s mum. What I didn’t plan on, was Avril explaining to a passer by “We are just re-enacting the scene in that film!!” NO!!

On the old MND front, my body was pretty stiff at the start of the week, and my walking was really quirky. On visiting my physio, she found that all my hip muscles were completely locked up. She carried out marvelous deep tissue massage and they were freed. I don’t pretend that this is slowing disease, but it certainly makes a real difference to me every week.

Bumped into to another relative of Lord Bragg’s the other day, Professor Brian Bragg, the infamous physicist and musician.

He is working on a new tv series, “The forces of everyday items”. He showed me his script.

“Here is a photo of me with a spoon in 2016. I had this spoon in 2005 and in 1985. The same spoon, but it has travelled in time and space to stay with me, here, now, wonderful, amazing” No Brian, amazing would be Arsenal signing a world-class goal scorer in this time and space! This is just a spoon.

He is on some serious herbs or something, but I am thinking of taking him driving and he can explain to the police officer that I wasn’t actually doing (censored) mph, but it was merely an illusion of the earth’s rotation amongst the wonderful stars against the deep velvety sky. Amazing!

One last thing, the Biotech company, Brainstorm, are about to announce Phase 2 results of their experimental Stem Cell therapy for MND/ALS on Monday. If you have read my Research page, you will note that I am very cautious about Stem cell therapies for this disease, but of course I await these results with interest.