“I’m in the middle of a chain reaction!”

– the words of Diana Ross written by Barry, Maurice and Robin Gibb.

As part of MND awareness month I am writing a couple of special posts. This one has the rather clumsy subtitle – MND caused by genetics, time and what?”

What is this what?!

As a person living with MND there is one question that I am asked quite a lot when meeting new people or folk I haven’t seen for a while. I feel that it is worthy of this little post in order to build wider awareness.

“Do you know what caused it for you, Lee?”

The answer most commonly quoted by scientists, scientific writers etc is a combination of genetics, time and environmental factors.

Now, although this is correct(ish), I don’t like word environmental. It can severely mislead.

Well, what do you first think of when someone utters the word environmental? I bet it’s

I know the last one is a bit crazy, but I say it because I think the word environmental actually excludes a lot of what our good scientists actually really precisely mean.

Now before I receive hate mail, there is absolutely NO doubt that environmental pollution causes disease and unnecessary deaths. However, although this can be generically quantified, being precise for many conditions is actually very very difficult. And when we research disease, we need to be specific. It’s science, not tabloid journalism (sorry, journalists!).

What scientists accurately mean is “other factors“.

The problem with the word environmental is that it immediately infers bias, and, of course, is often highly politicised. It can seed weak science and claims about “this and that”. I have read a lot of so called science which is not actually science but opinion. Some are innocent mistakes, but one of the reasons for my blog, as you know readers, is to clarify.

I typically cringe when I hear

“Oh yeah I lived near that electricity pylon”, or “yes I swam in dirty water in my teenage days.”

Science is all about the removal of bias and repetition of any potentially significant findings.

What scientists really mean by these factors is:

Something that exerted/exerts change on the workings of the human organism. And those external factor(s) could operate anytime between the moment of conception (or even before – complicated one), during the 9 months in the womb and any moment in your life up until the point the disease developed or even accumulated over time.

What implications does this have on finding a therapy for MND?

Well I think we have to be mindful that studies looking at these factors are effectively infinite and may require many years of data gathering if not decades. So in reality they are almost a non starter. My personal view is that we do too many of them, but it is only my opinion. Scientists are, by nature, people who don’t like to criticise other scientists. Perhaps they should more? We don’t now live in Galileo times!

Let’s delve a bit deeper by examining an obvious disease causing agent. I use the word obvious because it was actually relatively easy to associate, although it took 50 years to sink in!

How was smoking implicated in lung cancer? Apart from being blindingly obvious that inhaling vast amounts of fumes/tar into your lungs might cause damage, it was simply the dramatic increase in a relatively rare disease in the early 20th Century at the same time as smoking took hold.

However, it took until the 1960’s to be totally accepted as the major cause. A huge percentage of doctors in the USA even smoked through the height of suspicion in the 1950s! But statistics now clearly show the massive decline in lung cancer, and other cancers since the early 1970s when smoking plummeted.

Personally I do find it disturbing that people still smoke knowing that it is the single largest avoidable cause of cancer, and seeing medical staff and patients at hospitals smoke absolutely defies belief. I won’t even discuss passive smoking! If anyone is in any doubt re smoking and disease, why is it the ONLY question that is repeatedly asked for simple life insurance??

The reason for discussing smoking in this way is that it is a proven and avoidable cause of preventable serious disease, but also it stuck out like a sore thumb. This is just not the case for MND.

Years of retrospective studies about MND absolutely show NO identified large play association. There are some suspected small increased risks with smoking and some other factors, but the data is weak, often not repeated, that nothing can be conclusive. Compare this to smoking and lung cancer. 89% of cases can be avoided by just stopping smoking! For detail on MND you might be interested in Ammar Al-Chalabi and Orla Hardiman’s paper on the The epidemiology of ALS: a conspiracy of genes, environment and time.

The lesson to learn is that even an easily proven association took a long time to prove, and just enforces my view that it is fruitless to search for the more subtle ones.

Yet there is still epidemiological research funded that basically tells us nothing, takes a long time and is searching for a needle in a haystack.

Although MND is not rare and will strike 1/300 of us, that number has been pretty stable for as long as records tell us. The only discernible change has been an increase in older people, but this has happened since life expectancy rose in the mid 20th Century. Strangely enough, MND used to be regarded as a rare disease of the under 50s. Despite some statements I see on social media, no more young people are actually developing it than 100 years ago. We just know about it more.

But all in all this points at a disease that is genetic with other very subtle factors being involved. No proven clusters have been found, and even the ones that appear to have been located have shown disputable minor differences.

So what could these factors be? Anything. Interestingly, the other factors themselves may be genetic, through complex multiple gene interactions, subtle effects, changes over time and many other feasible triggers.

Epidemiological data studies are just not the right way to solve MND and other subtle disease problems.

Yes we might get lucky, but focusing on actual disease cellular changes is the best way ahead and these will almost certainly be revealed by more and more detailed (high resolution) genetic analysis.

It’s best to think of MND as a cancer that we have no cure for, or known cause. Those brain tumours which just hit dear friends out of the blue? Why? We just don’t know.

Although I don’t like to compare MND to other diseases I am going to make some some observations as compared to cancer. I have no motivation in doing this, but it just helps to raise awareness of the disease by providing some context. I have assembled the following chart showing the current percentage of preventable disease cases in the UK. I have put MND at the top. This is cancer data available publically from the Cancer Research UK site 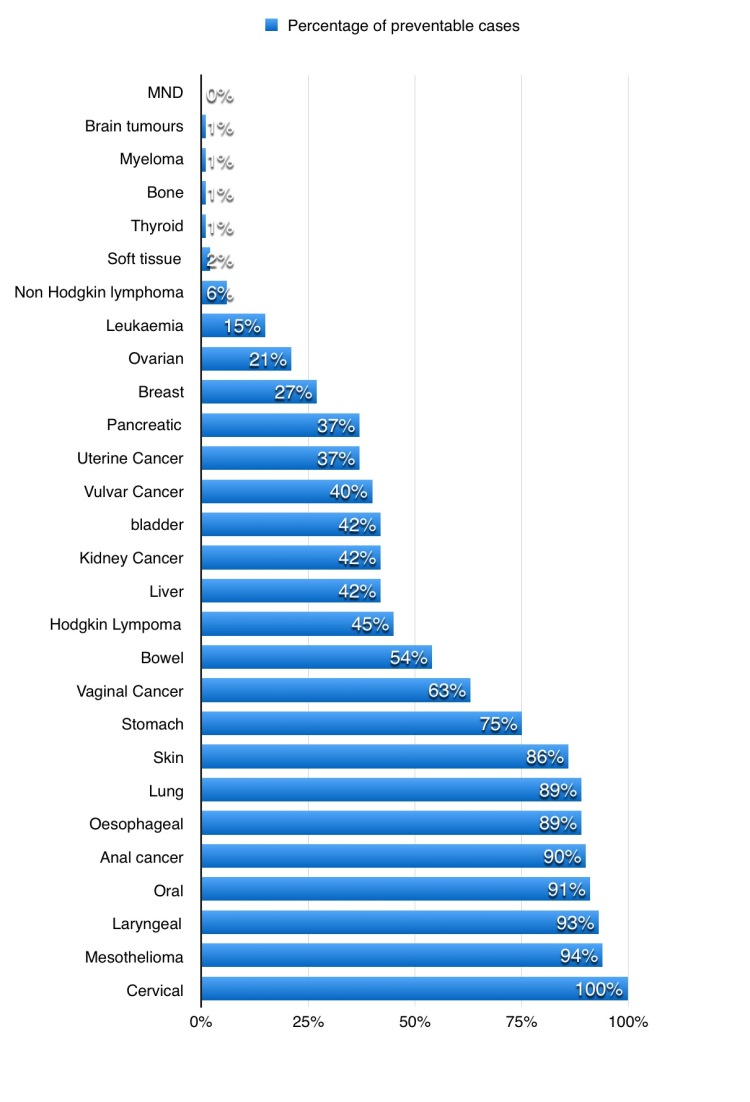 The table speaks for itself and shows both the marvellous progress made in identifying cancer causes, but also reducing the preventable cases through combinations of lifestyle change/screening/vaccinations (e.g. Cervical which is near 100% preventable now).

MND sits there at 0%, and the only thing that “might” prevent a small number of cases, and can be actionable, is the age old gem of smoking. Don’t do it kids!

More on cancer comparisons in future posts. I am convinced that with the continued progress we will make the same amazing inroads into disease management as the superb work with Cancer.

And now a bit of history. Cancer is not modern. Nor is MND – we have 100s of cases in the 18th Century well documented.

So MND is a complex disease that is caused by a mix of genetics, time, and other factors. Let’s not hear the word environmental again!!

I want the same thing as everyone, a therapy/cure but I don’t want the scientific community to be distracted and/or delayed in getting there.

Let’s find that chain reaction and break it by solving the mystery of genetics, time and other factors!

My next specialist MND post will discuss the following…

“So my MND has been tested and I have a genetic version? What does this actually mean and do we know why a specific gene mutation actually causes the disease?” – I will have to make up a snappier title before writing it!

Support MND Awareness month – text LMND52 £5 to 70070 to donate or visit my “One way or another” justgiving site.