NO readers! Not that sort of coming out, I mean the snotty cold I had last week has finally come out, and I am now apparently contagion free!

Avoiding people (and animals) with colds is a pastime that all with “chronic” health issues have to do.  A few years ago I never thought I would be doing this. But hey, it gives you another reason to add to the rather ancient excuse for not going out….

“Sorry, I am washing my hair tonight”

Actually, what would you do if you were invited to a ‘hair washing and grooming’ night but didn’t want to go?!!

I did have one day of pure Snot Green 4, from the Lord Bragg Bodily Colours paint chart, and along with a home assembled, simplified nebulizer (a pot and a nose mask with Olbas Oil), I managed to shift the blockages. I avoid any drugs like cold remedies as they don’t generally work (yes more snake oil folks), and they sling chemicals into your body you just don’t need. 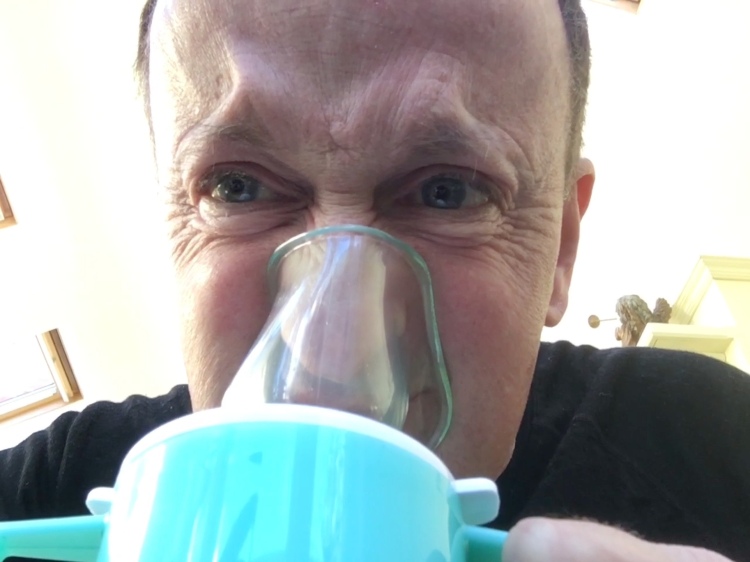 Actually this nose mask reminds me of a film, Blue Velvet, produced by David Lynch. Some of my readers may be aware of the movie and his other works, such as Twin Peaks. Blue Velvet is a level above his other flicks (in terms of pure weirdness). I do remember selecting it (foolishly) to watch on video with Jean and my parents after a meal when I was younger. Big, big mistake!!!! Embarrassing, awkward position moment!! Watch it to see exactly why, folks! It now has a Lord Bragg XXX warning! Only wholesome, Lassie Come Home films were watched with my parents after that night, ahem!

Last week one of my readers, let’s us call him Mr Pedantic, attacked me for my recent tirade on milk chocolate only for me to then recount eating mini mars bars, which of course contain milk chocolate! I constructively pointed out that milk chocolate in a compound of caramel and toffee was actually acceptable. It is standalone milk chocolate that is truly evil! He accepted my excuse!

On the subject of being pedantic, or just plain difficult, that reminds me of Lord Bragg and his awful job working for a TV Complaints Company. Those of you in the UK will recognise the sort of program, BBC Newswatch, where people phone or email with their pathetic comments on TV programmes. I caught him on video during this work with the TV company explaining and taking a live call! Enjoy….

I have now also uncovered a video of Bragg in the late 1960s. I need to process it, possibly censor some sections, but it will soon be hitting our screens!

The moral of the video is that people need to keep calm, and put things into perspective! Synchronise your life with karma!

Talking of synchronisation, every week I sort my pills out for taking the next 7 days. I don’t take many, but it’s best to keep everything in order. I have some heart pills and the good old trusty single pill (Riluzole) for MND. I noticed this time that my renewals were suddenly going to be in perfect alignment!! All my prescriptions are going to require renewal at precisely the same time!!! A perfect alignment of the planets!!!

With modern technology, such prescriptions are now easy. Sign in online, select, select, select and submit. Saves the grumpy chat with the doctors’ receptionist!!! You know the sort of thing, readers?! A lot of people comment that lack of human contact is harming society. But the conversation I am alluding to, especially with my drunk voice, is perhaps one of those conversations we can all do without!

Keeping with the “perfect alignment of the planets”, just what on Earth, or the Universe, could I have been browsing on the internet or amazon to be recommended this!!!!?

Who knows?! The mystery is still puzzling us!

Also in the news this week, Jean, my lovely wife, has lost her Fitbit!! Yes totally annoying! Knowing that she has obviously put it down and chucked it out in the rubbish, I calmly said don’t worry, we might find it. However, despite using various Bluetooth scanning apps and stripping the house bare we were unable to locate said lost item. At least I know what I can buy for a present. It will probably turn up though, on one dark day in January in a few year’s time. I remember being given a Mont Blanc pen many years ago, worth a few Bob (for my US Friends, a few Bob is a phrase we use here in the people’s republic of the United Kingdom). As I hardly ever wrote with a pen and paper, I gave this wonderful fountain quill to Jean as she was always marking in her teaching job. But, you guessed it folks, she lost it!!!!!!

Nothing was heard from the pen for 5 years!! Then suddenly, when we needed to have the fuel tank removed from our old mini for some repairs to the body work, the engineers found it behind the tank in the boot!!!

It was a miracle! You will be pleased to hear that the pen is still working and is safe, and not lost!

Also in the news this week, I visited the dentist. You the know the place that is about as accessible as hell! I have written about it many time including in the post – Suffering-Succotash It involves steep stairs, and hauling up a rollator! We did actually ask this week about potential solutions for the future. You guessed it, “Find another dentist!”.

I was actually going to suggest treatment outside on the pavement (side-walk for my USA friends). Mobile dentistry!

That’s it for this week folks.  My new research post being worked on is taking a bit of time. It needs to be perfect though!

Oh and the Heat is on here in the UK, with real fires and our heating systems firmly in use now!