Hi readers! Well well, a week or so after snow had covered the south of England, we are now in spring! Or are we? Please note this post was composed before the snow fall today!

After a recent dump of snow in the south of England, over 5000 gallons of Bragg’s Patented Snow Melt fluid were deployed by our local council. With my inability to even attempt a walk on snow because of MND, this was a welcome sight!

It was just in time, as local shoppers were getting a bit violent when supplies had started to run seriously low in the village.

A particularly ugly and unsavoury incident occurred when one lady was told that she couldn’t have her regular Peruvian Organic Extra Miniature Quails’ Eggs and had to make do with regular ones! The scene was made infinitely worse at the store as it was mark down time and the manager was playing music by the legendary depressive singer, Leonard Bragg, from his new album.

His version of Anarchy in the UK is extremely disturbing and was perhaps not the most appropriate song to play at mark down time!

Remaining on the subject of snow, I caught an article on the UK BBC News concerning Victoria Pendleton, the famous ex Olympic cyclist, now planning to climb Everest. It’s great that she continues to pursue dreams after her Olympic achievements and we should all take a lesson from her.

Mind you, the words of Sigourney Weaver in the film Alien Resurrection (part of the marvellous Alien quadrilogy) come to mind

“You are all going to die!” or the immortal words of

“We are going to need a bigger boat!”

There’s great news for Victoria and others climbing Everest in 2018. Lord Bragg has opened 4 more of his Bragg’s Burger Shacks on the mountain at Base Camp, Camp 2, Camp 3 and the all new superlative 24 hour Summit branch! What a guy! Bragg, bringing you nutrition when you need it most! He would, however, like to point out that the toilet facilities provided at the summit are for patrons only! Please note it is a fully accessible toilet.

Perhaps a step too far? Well, if I were capable now, I really would consider such a challenge (although probably a desert thing rather than ice and snow). My step too far now, that I face daily, is getting to our front door before a delivery person leaves after knocking! I try to be in the front room, close to the hall, but more often than not I am in the kitchen! Moving as fast as I can, I grab the door frame and then a dining room chair on my way in to the living room. By now, the visitor has angrily knocked at the door again, making me jump and I nearly fall. Finally I reach the door just as he is leaving our property!! It is like a work out and major expedition all in one for me!

I had a near death experience (slight exaggeration, I admit) whilst at friends recently for a meal. As you know MND affects all voluntary muscles including those for swallowing and breathing. I occasionally have food go down the wrong way, but so far have always managed to cough powerfully (the saving grace). Fortunately it doesn’t happen that often, but when it does it can be a bit worrying for me, but absolutely terrifying for on-lookers! As usual it was my own fault, talking at the same time as eating, and a grain of rice got stuck. After an untrained Heimlich Maneuver from my friend (Jeesh it hurt) and more coughing and wheezing, normal service was resumed! It had to be, as it was apple crumble for dessert!! The apple crumble was consumed without incident, although I was watched intently by our hosts! I guess they didn’t want a high-speed splash of the custard to fly across the room!

On a serious note, the only way to face these issues is to relax! I have a what will be will be approach. Somehow if one just thinks “this is serious“, it makes it far far worse. The old human brain can make things so much worse than they need be at any one time! Mind you, don’t invite us around if you are precious about your fluffy white carpet and curtains!

Last weekend we were staying at friends when our hostess announced she was now a Flexitarian! Intrigued by this statement, and automatically assuming it was an addition to the gender or sexual preference orientation debate with a gymnastic twist, I commented that “Hey that’s fine by me. What’s your favourite apparatus?” On hearing that it was actually a new diet craze, I was suitably embarrassed. For those who don’t know, a Flexitarian is a person who is reducing meat intake and/or someone who has empathy with vegetarianism but can’t go the whole hog (so to speak). I told Lord Bragg about this, and he laughed,

“You mean someone who loves beautiful bouncy lambs, but also loves them with mint sauce!?” 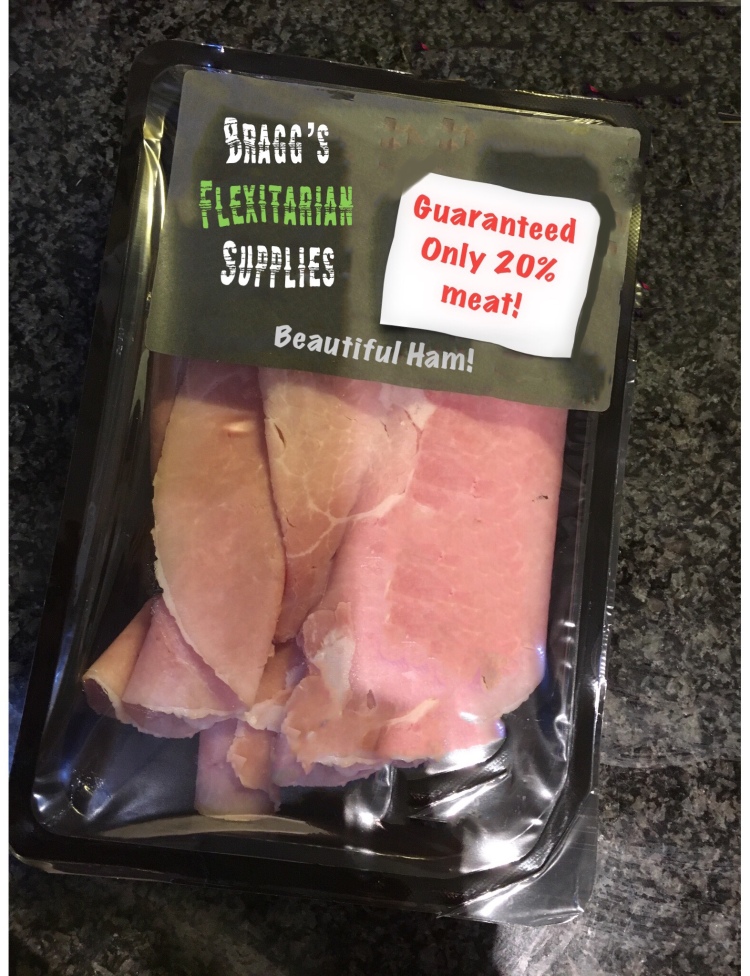 Finally Lord Bragg would like to state that the fluorescent nature of his Snow Melt fluid should disappear after about a month. In the meantime, we are all enjoying the Bragg’s Lights (Aurora Braggrealis) in our village!