Good day all. Here is Dr Peter Scott-Morgan’s promised guest post as part of MND Awareness Month here in the UK. A provocative article on the challenges we all might face and the pioneering research he is undertaking. His post is about choices that we could take that, as Peter himself often says, will help us “not just stay alive, but also THRIVE”.

My early education was heavily influenced by the scriptwriters of Dr Who and Star Trek. As a teenager I believed that any challenge in the Universe could be overcome if only you were clever enough, courageous enough, and had access to enough ultra-cool Technology.

Of course, now that I’m an adult – and a scientist – I believe exactly the same thing.

And, knowing everything that I do about what cutting-edge Technology can achieve, I’m steadfastly with Dylan Thomas when it comes to the idea: “Do not go gentle into that good night.”

With MND, there’s no need.

Here’s why. Up until November 2016 I could run; I was diagnosed with ALS in November 2017. Now I can’t walk, my arms are very weak and I have no grip. My voice is starting to go. And my lung muscles seem to be weakening too. Thank goodness all these issues are eminently solvable with the right Technology – I just need a comprehensive set of maintenance upgrades.

To me, my failing motor functions are all simple ENGINEERING issues and they each have TECHNOLOGICAL solutions. Yes, they’re caused by my Medical condition, and Yes, one day there will be Medical means of improving and then preventing and eventually reversing my particular strain of MND, but NO, for those of us with MND today, Medicine does not offer much hope of substantially improving our Quality of Life this year, next year, or maybe this decade, or even the next.

TECHNOLOGY does. Dramatically. Here’s how.

I’ve already voice-banked the maximum inventory on Model Talker and I’m researching with them how to add some Expressiveness so that my synthesised voice (which already really does sound rather like me) nevertheless doesn’t sound like Peter-On-Tranquilisers. And I’m also starting to experiment with Dragon Professional dictation software. My plan is not just to use it for the indeterminate period when I can talk but no longer type, but then to retrain it once my voice starts to slur dramatically to see whether the machine-learning can still interpret my (by then) very-poor speech as if it were just an unusual dialect.

I’m already experimenting with Eye Tracking technology to practice how best not just to communicate when I’m Locked-In but also control my environment. Basically, I’ll still be able to control anything that has a Remote Control – it’s just that, unlike now, I won’t ever lose the remote or try to use it on the wrong device. In due course, my eyes are likely to become my primary means of communication and control. But even now I can’t carry on wearing contact lenses, and glasses can affect the Eye Tracking system. Worse, when I’m in bed at night and Locked-In, I won’t even be wearing glasses. So, I’m going to have laser-correction surgery. But I’m not going to do it normally. I’m going to adjust the optics of my eyes so that I have perfect vision at 70cm – the distance I’ll be away from my computer screen. Whether I’m in bed or on my wheelchair.

Lift installers have just finished putting into my home a Platform Elevator that is big enough for an electric wheelchair and a Carer, and it has so many Hi-Tech safety devices that even I’m impressed. Meanwhile, I’ve replaced my bed with a Hi-Tech hospital equivalent and electric ceiling hoist that were chosen so that their electric motors are all controllable by computer – and therefore by Eye Tracking. Already, I struggle to turn over in bed, so rather than have Carers turn me every few hours, I’ve got a computer-controlled Toto-Turner under the memory-foam mattress that throughout the night imperceptibly slowly rocks my sleeping position by thirty degrees, then back again.

I’m just ordering a Wheelchair Accessible Vehicle that, fully under my remote control, will lift me and my wheelchair up by the side of the vehicle and let me move to the passenger position next to the driver, where an automatic locking mechanism will secure my chair without the need for any straps. Of course, for that to work, I’m replacing my Power Assist self-propelled Active User chair for a fully-electric wheelchair with a top-end controller so that in the future it can potentially interface with an automated-guided-vehicle collision avoidance system; if a retail robotic vacuum cleaner can avoid the cat, then I see no reason my chair can’t do at least as well.

On 10th July I’m booked into hospital for what I now discover is an operation that has never before been granted to someone with MND – in the UK or the USA. I asked for a Triple-Ostomy, which basically is the complete re-plumbing of my gut. Feeding tube in, solid and liquid waste out. Again, it’s a purely Engineering solution that happens to be implemented in a hospital. After it’s done, for evermore I’ll only need a Valeting Service by a Carer in the morning and evening. Other than that, once transferred to my wheelchair I’ll potentially be fully independent throughout the day for the rest of my life. As a result, I’ll never once suffer the delights of Being Toileted or having to wear an incontinence pad ‘just in case’. For me, this operation is going to be absolutely liberating. Oh, and the feeding tube will also keep me alive…

In due course, maybe in a year or two, I won’t be able to breathe. No problem. As soon as makes sense, I’ll have a tracheostomy so that going forward I have the security of 24/7 ventilation via a quiet pump on my wheelchair – with occasional pulses of air (Cough Assist) to lessen risks of things like pneumonia. At this stage, combined with the previous three tubes in and out, I’ll have had a full Quad-Ostomy. Sadly, there are only four, so I’ll be Ostomied Out and will have to seek my excitement elsewhere.

All the technological solutions I’ve just skimmed through represent where I am now, about six months after my diagnosis. It’s a start. It will pretty well guarantee that I survive my progressive system shutdown, potentially for decades. But it’s only a foundation for the really fun stuff – the technology that despite me being Locked-In will help me not just survive but THRIVE…

In the next six months I’m going to explore just what emerging Hi-Tech there is out there in research labs around the world that can transform my experience of being Locked-In. Everything from Brain-Computer Interfaces and AI and Robotics, to Exoskeletons and Augmented Reality and high-resolution Virtual Reality. It’s the sort of kit that can potentially transform what it means to be human. It’s what the tabloid press might unashamedly describe as Peter’s Quest to Become a Cyborg. Being a scientist, of course, I could never condone the use of such flagrantly sensationalist language – even though, to be fair, the phrase does accurately describe exactly what I’ll be doing. 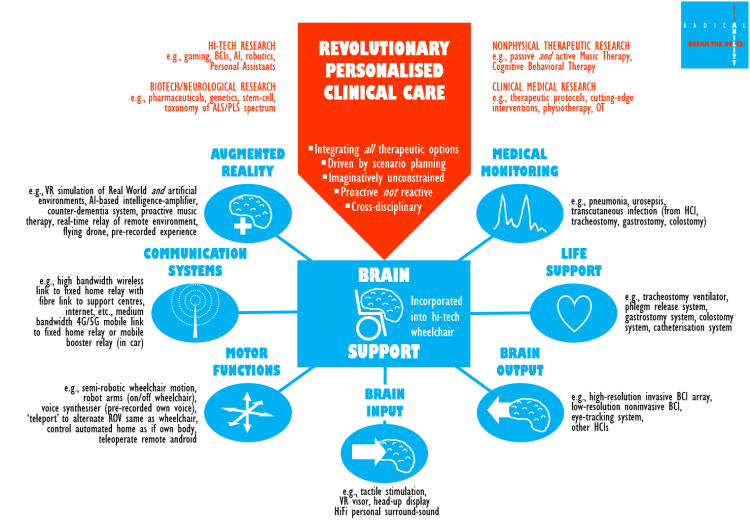 This is the ultimate Boys With Their Toys stuff. I am really excited about it!

Well, I would be, wouldn’t I? After all, I studied hard at university, and inevitably my dominant educational influence moved on from childish Dr Who and Star Trek; it was taken over by Hollywood blockbusters like Star Wars. As a result, I know perfectly well what happens next to those of us caught up in the epic story of MND.

Think about it. Some hack Cosmic Scriptwriters have just revealed the Big Reversal in our script. It’s meant to be really emotional. Just when we think our lives are on track, looking OK, feeling optimistic – EVERYTHING unexpectedly falls apart. And EVERY scene in the montage that follows only builds the sense of doom: 30% likely dead in a year; 50% likely dead in two years; or the living death of entering the Dark Void of being Locked-In; no cure; no choice; no hope. All is lost. It’s the end.

Except it’s not. This is thirty minutes before the end.

As is obvious – if we only break free of the cold grip of the storyline – this is the point in the movie when an unlikely ragtag collection of rule-flaunting rebels finally band together under the common goal of breaking free of the past. It’s the Big Choice moment in the script. Will they? Won’t they? Are they clever enough, and courageous enough, and do they have access to enough ultra-cool Technology.

Then, apparently against all odds, they win a symbolic victory. Proof, for the first time ever, that things can get substantially better rather than always worse. A New Hope.

So, as I stand (or at least sit tall in my Hi-Tech wheelchair) as part of that gathering band of rebels, I can’t stop finding myself eyeballing the Dark Void and taunting it:

“Really?!? Is that all you’ve got! You think our only Weapon of Choice is Medicine?!? Well, say Hello to the Technology of the 21st Century. That’s now our Weapon of Choice – Too! And every second of every day of every decade it’s getting more powerful than you can ever imagine. So, Dark Void: BRING IT ON!!!”