Hi, readers! Get a grip! What do I mean, my loyal subscribers? Read on, into the mystical, yet strangely, totally believable world of onein400…..

All of us do certainly have to get a real gripright now. Autumn is just arriving here, and the challenges It brings.

“Lee, what do you mean? It’s going to get a bit colder but just get used to it. Appropriate clothes guys, and we should all be ok”

Yes, I know! But, for me, my continued focus on precision is unrelenting. After months of dry pavements having just a bit of rain under my feet is terribly unnerving. I have a new pair of my main footwear, walking shoes. They have huge grip!! Sometimes too much. Theseshoes have a grab feel on deep pile carpet for example. I used to love deep pile carpet.

Last Saturday it rained for the first time in ages. We were off to Dorking (yes my American friends, this is a real actual town name!) to a meeting of the UK South East MNDAssociation Branches. We were representing West Sussex South! We so so rule over West Sussex North! They are just a bit too northern!

I had been invited to talk (haha) for a few minutes as part of a thank you to volunteers and everyone who gives their valuable time to our charity.

Jean was driving, so we were going to burn some serious rubber!! (That’s tires for my American friends, tyres for my British comrades).

As I always like to make an effort, and try to be entertaining, I had a real challenge this time. My voice has got worse, and I thought how could I do anything absolutely guaranteeing a good 5 minutes of chat?

An idea suddenly announced its presence!

Why not make a video!?

I would be able to film it, and re-take segments when my voice was good during the days before. All I would have to do was introduce it, and if my voice managed to survive I could speak a bit more live. Better still, I could ask Lord Bragg to record it and speak for me! Genius! I had a real grip on this! What could possibly go wrong?

So I assembled a masterpiece and sent it off to the organiser. I also took a copy on my phone and memory stick. Oh yes, call me Mr Contingency! I was always known as a stickler for preparation!

The event was being held at a Vineyard (warning sign) which had function rooms. We arrived early, another one of my business foibles. Never once late for a meeting in 35 years! Being late is one of the rudest things you can do.

We wandered in, and proceeded to the nice and airy cafe.

It was only 11am (11 in the morning!) and bottles of wine were being consumed! Whilst we had a nice appropriate coffee, I couldn’t help but stare at the family, trying to look posh and sophisticated, squirreled away in a tasting cubicle, with about 7 bottles (I counted) of wine on their table! And I am certain I overheard one lady with her grand children in hand saying….

”You two settle down here, watch my handbag whilst grannie gets tanked up!”

After finishing our coffee, I leapt back on my scooter, cleared the breathalyzer station, and climbed into the lift to get to the first floor.

Getting up for my speech, I scootered across the safety cover concealing the cables to the projector, arriving at the presentation area. I suddenly noticed some children in the audience!

Had Lord Bragg recorded any of his 1950s, slightly adult, and non-pc comments in my video?

I decided to stay seated as the lectern didn’t look like it would take me leaning on it! Aside me falling into a pile of jibbering mess, I would have also landed on top of the organiser. Not wishing to be a victim of the #metoo and intrusion of #safespace virtuous brigade, I played safe.

There is an illegal unauthorised bootleg video going around of my presentation. Here are some screenshots

Lord Bragg is asking for any information on the slimy perpetrators, and is offering a reward of 1 years’ free Lord Bragg products (excluding Organic Range) to anyone who has information. He says anyone grassing on the culprits will be entirely unconnected with any resulting enforcement action. What a guy!

The presentation went well and no children were left permanently mentally scared!

On arriving back home I noticed that one of dogs had got her hair caught in my rollator brackets when she ran under it during one attempt at trying to knock me over. However, this event was actually very timely! When I bent down to clear the hair from the underside, I noticed that two screws were nearly fully unwound from their receptacles! I immediately attended to this impending disaster!

Thank you, Poppy! Without you I would have ended up in a pile in the alley once the screws had sprung off! Or had you actually loosened the bolts yourself you little angelic devil? I am keeping my eyes on you! These two make the Kray Twins look like pussies!

Yesterday, it was time for our winter flu jab. Our great NHS has rolled out a great winter process, and I received a text reminding me of the walk in (how disablist!) session.

I flew past on my scooter and challenged the nurse to do a “drive by” vaccination!

Take awareness of this disease to a new levels; Reenforce the fact that it can hit anyone at anytime and its relentless progression.

Over 80% of all those diagnosed with MND will experience the ride shown in the video. It’s watchable, I promise.

In order to relax, I still manage to get out on my trike. Here I am in our local park last week. 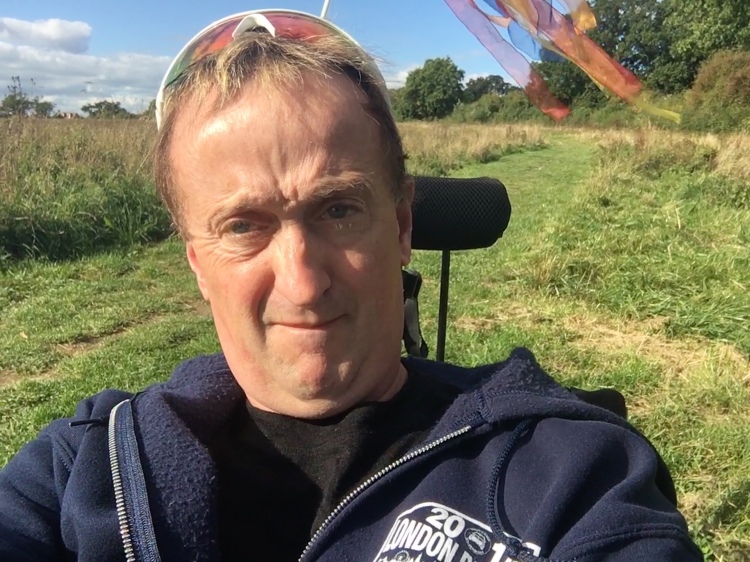 But even this gentle pastime holds danger unexpected! Out and about on Tuesday Jean and I bumped into a friend. I now believe a lot of secret code is used by the villagers. Our friend gave an excuse that she didn’t come to the pub last night as she was giving a saxophonist a lift! Sniggering childishly, we parted ways….

Get a grip Lee, not everything is like in your mind!