Darn this pesky pandemic! It interrupted my childhood dream of becoming Olympic pole vault champion! But hey, at least no one else took home the gold medal! There really is some real justice in life!

This, and more in this week’s ludicrous and yet delicious day out with onein300.

Back in my ‘attempt anything’ days, pole vaulting might have been a real bucket list item. Assembling a giant crash mat in our garden and just wondering, perhaps just, if I could run fast enough to fling myself over the washing line with a scaffolding pole!

Why not give it a go? Life is for living, or perhaps getting seriously and unnecessarily grievously injured!

This reminds of me of the time when I was skiing at the top of a European resort and stumbling across what I thought was a snaking line of abandoned slalom poles.

I will have a go at these at speed (well I thought it was really fast).

When out of nowhere a French ‘toddler’ (not much than a foetus really!) in a space suit and helmet shot past me at speed! I had only strayed on to a slalom practice area for the local future champions! I made an immediate but rather messy exit! Find out more about my Olympic fantasies in this earlier post, featuring Otto Bragg a distant relative of Lord Lee Bragg. 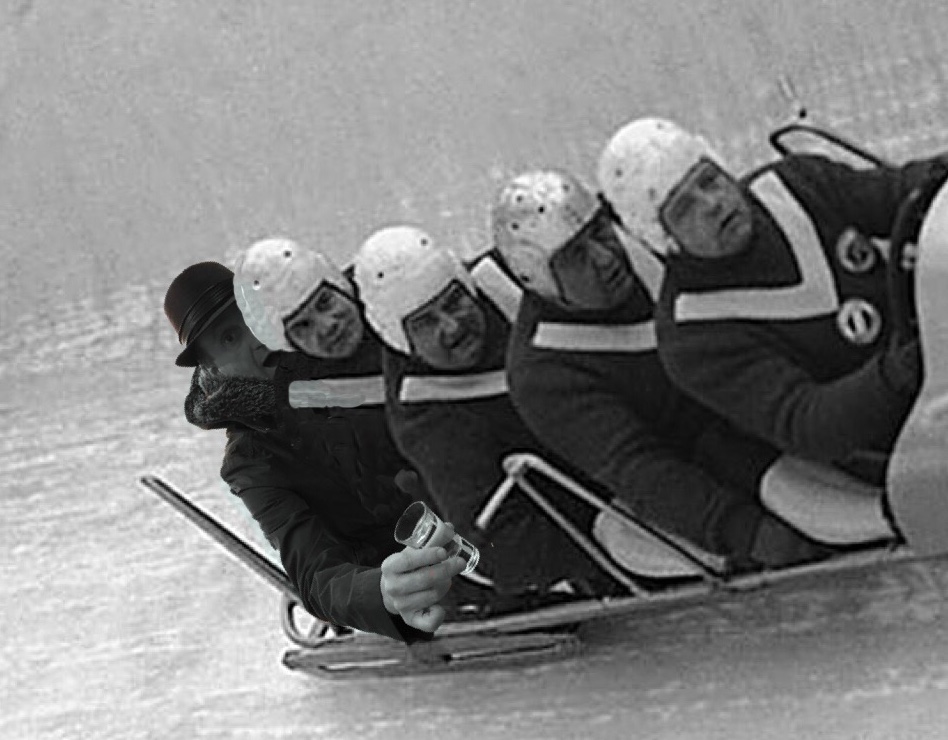 If it wasn’t for the pandemic I might not have actually become the now famous nutter who cycles his trike everyday in our village. It has certainly got me outside in these odd times, perhaps, ironically, more than some more physically able than myself.

I will never forget the inspiration to purchase one of these remarkable pieces of machinery. It was a gentleman, named Ray Spooner, another MND patient, who sadly now is no longer with us. He was a manic cyclist from Chicago. Ray was driven to acquiring a recumbent trike when he had fallen badly on his standard bike during a mammoth cycle across the USA just after he was diagnosed with MND.

I can’t quite recall how I stumbled across Ray’s blog, but I am glad I did, for it was a total life changer for me. Take a read of Ray’s writings, you won’t regret it. He travelled a lot in his youth and he wrote great posts on his many trips – absolutely amazing.

And the funny thing? When I asked Ray where he got the trike, he told me from Cornwall, England!! In my own back yard, and he had one shipped 5000 miles! If you are interested take a look at ICE Trikes.

Returning to present day and life on my trike; I have two little recent stories to tell. First, the other day I was out on a ride and returned to the village down a narrow piece of road when I heard a loud crash right behind my rear wheel!

Thinking something serious had broken on my trike I stopped, circled and returned to the scene. It was in fact a couple of clay roof tiles that had dislodged in the wind and slipped off of a roof and crashed on to the road. If I had passed one second later or the wind gust was earlier they would have hit me!!!

I started thinking perhaps I should really wear a helmet, having stopped wearing one long ago because of the interference with my headrest. But then of course, I thought a bit more, and realised my logic could be extended to anyone wearing one walking?! No way!

Born to be wild!!

Staying with my trike I also had a bit of emergency maintenance to do on my wonder machine. Recently I had experienced chain drag on back peddling slightly; the chain was bunching up. I was even getting a bit of chain suck, oooh Missus! I’ll let you read about what that is in your own time. My bike is more than cycling. It’s critical exercise for my stiff body and brings a semblance of my old life. It is my wheelchair, of sorts. Any prolonged absence from my bike would be awful. With the pandemic how could I get it fixed, with limited access to bike stores?

Above all, as I can’t simply move around, crawl on the ground etc etc I rely on Jean to help me to move things, as in most of my life tasks now.

Despite my upbeat approach to life now, I absolutely rely on Jean for my ‘independence’ (if you can call it that). Jean does so many of the physical tasks that I have to be very observant of her tiredness etc. If anyone is in any doubt of some of the desperate pleas in the news for carers being both valued and also calls for covid vaccinations for carers, be in absolutely no doubt of the need. Until a steam train like MND hits we all exist in own little worlds insulated from reality. The covid situation has given millions just a tiny insight into the struggles that many experience everyday. COVID will soon ultimately end, although it may seem endless, and the things will go back to normal for the majority.

However, I am absolutely ****ing determined to do as much as humanly possible in my life, and darn I do enjoy technical jobs such as cycle maintenance. So this time, Jean had to put my trike on a customised bike stand whilst I used my rollator and moved slowly around it and carried out the work from a stationary and seated position. 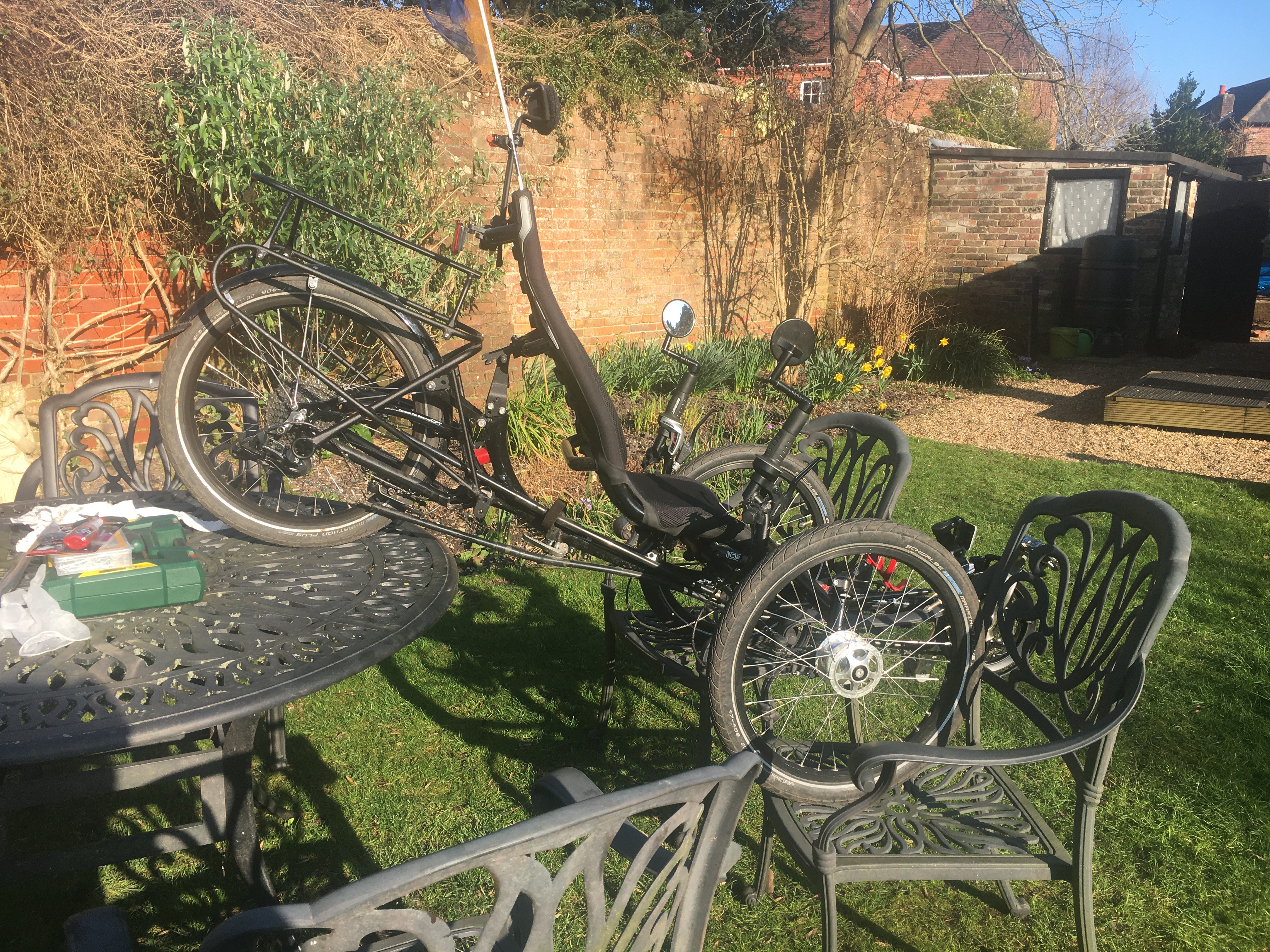 Anyway, I did manage to fix it, but not until after a bit of diagnostics with trial and error. I’ll save you the detail of cleaning chain tubes out, indexing, limit adjustments, which didn’t fix it, and cut straight to the issue that was causing my developing clunky gear changing. This…

It’s the lower cog in the rear derailleur. It had seized, bearings locked, and was only turning slowly. Once replaced it was fixed and the chain moved freely. But then another revelation was to happen…..

After a couple of rides I noticed that my cycle ventures average speeds were up by 12.5% (precision is vital, folks!) since the repair. This one slow cog, hardly noticeable excepting the clunky gear changes, had slowed me significantly.

Anyway, there is a bit of a lesson there. Small changes can make huge differences, and also those small changes can creep up on you. Although, sometimes letting ‘sleeping dogs lie’ is a good thing! More about these conflicting tensions of life in a future post.

But for now, before anyone states that I look like Shaggy from Scoopy Doo, I will leave you with those thoughts!

Back soon with a more serious post on our campaign in the UK for increased funds from government for targeted MND research and an MND Research Institute right here on our island shores. 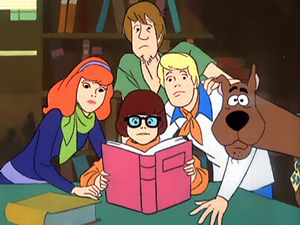